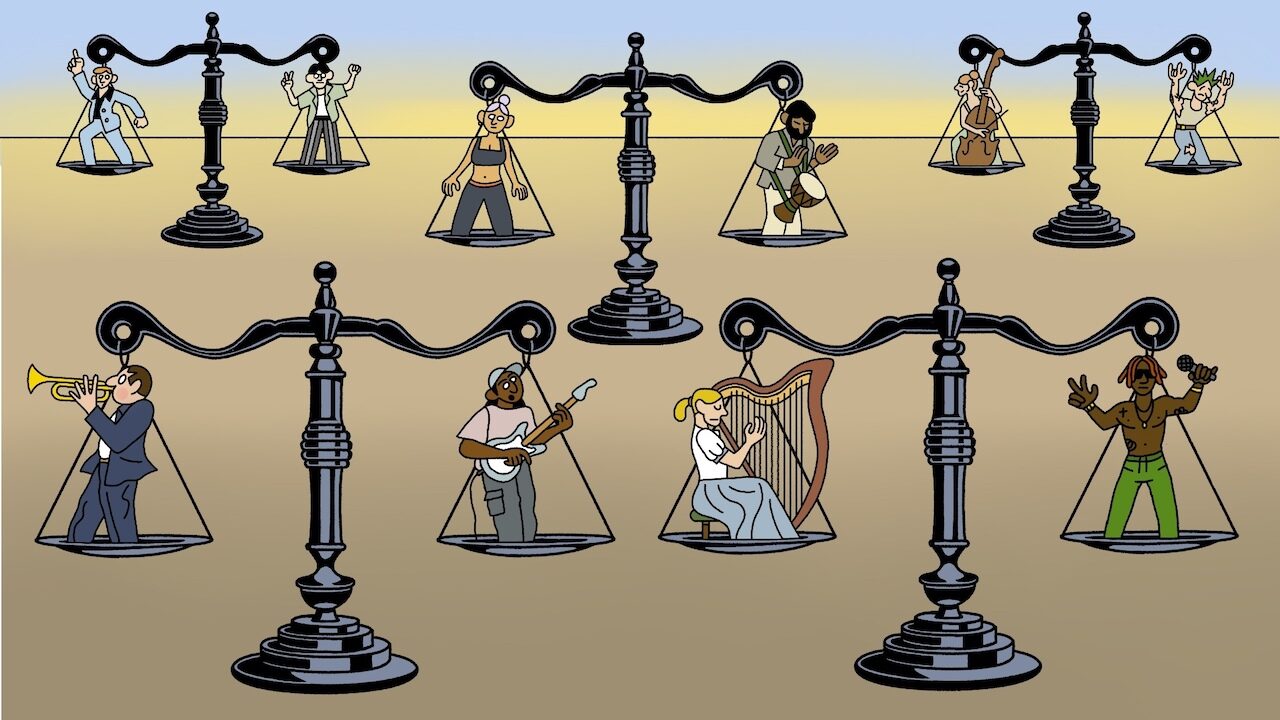 There is a general notion that music streaming platforms are not created in an artists’ best interests. The remunerations offered by the former are not deemed to be enough to satisfy the latter. Often overlooked however, is the fact that streaming saved the recording industry, a sector ready to disappear in the 2000s under the strain of an economic crisis and even more so from piracy. And thus, it is thanks to streaming that even in the midst of a pandemic, the recording industry continues to grow, according to SNEP’s 2020 report*.

An unbalanced ratio of music genres

This model has been a game-changer however, since it favors the sounds most listened to by young people – in particular, rap and a certain international pop music – for a number of reasons. The first is demographics: young people were the first to migrate en masse to streaming platforms, and some of us in the older generation are unlikely to ever make the jump. The second is the model per se: where the CD offered only a single remuneration to its artists, equivalent to its purchase price, streaming offers potentially unlimited remuneration, relative to the number of streams. Young people also spend more time listening to their favorite artists, and often quite compulsively. The third factor is the platforms’ payout system, which is the main topic of this column.

First and foremost, let’s be clear: this is not about putting young people on trial – they have always been a core target in our industry – and even less so to criticize rap: if the same situation had arisen 30 years ago, it would have been with rock music. Rap music today is a particularly rich and varied genre, and here at IDOL we distribute our fair share of it, with pride. What we want to focus on however is what the CNM [French National Center for Music] noted in a recent study – that most of the genres adult audiences prefer are disadvantaged by the current model of streaming: classical, jazz, rock, world music, certain subgenres within electronic music, French chanson, etc.

Artists labeled within these genres now earn considerably less from their recordings than they did in the CD era. With equal levels of success and the same fanbase size, tours of the same scale and equivalent PR campaigns, between a rapper and a world music artist, the income from streaming tips the scales towards the rapper.

The current payout system is unfair

One of the factors of this shift is the payout system streaming platforms have been using, known as “market-centric”. With the current system, customers do not necessarily pay the artists they listen to directly. Their subscription fees are redistributed to record companies who operate a pro rata royalty model based on the artists’ share of overall plays on the platform. For example, if an artist accounts for 5% of a one-month period’s overall streams on a streaming platform, 5% of an average user’s subscription fees would be redistributed to that artist, whether the user listened to them or not.

This system did not shock anyone back in its early days: it was somehow deemed logical and this was what technology allowed us to do back then. But it has become clear today that the system is unfair: 70% of the platform’s monthly income is redistributed to artists listened to by only 30% of subscribers (“heavy users”). As these users are mostly young people, the imbalance described above is therefore reinforced by this payout system. The time is right for a change.

The CNM study only validated what we had already assumed, namely that the switch to a payout system which would distribute what the subscriber pays only towards the artists they listen to (hence “user-centric”), would not radically change things. Some of the most streamed artists would lose a little – at most up to 20% of their income – to the benefit of a very large number of artists who are listened to less frequently and by a more mature audience. The added value would not be that substantial, but it is these artists who need it the most.

In the short term, there are likely to be winners and losers and it is tempting to stick with the status quo and the situation as it is. But the current favorable economic situation would allow us to smooth out these variations. On the one hand, the streaming market has been growing rapidly. On the other hand, the current payout system predominantly favors “big” artists. For these two reasons, the reduction that some artists would have to agree to would be almost insignificant to them.

The payout system is only one of the levers for reducing these inequalities, but if the sector does not embrace it, then the diversity of music production will end up undermined. Of course, producers, labels, distributors and broadcasters need to feed themselves and will naturally turn to what works best for them, at the risk of moving towards a standardization of creation which will inevitably, end up boring a significant portion of the audience. Let’s not forget that diversity is an indispensable condition in the vitality of the market, including for the success of mainstage artists.

Rather than beating around the bush any longer, the time has come to push for a fairer form of payout. Switching to user-centric is not a revolution per se. This will not upset the hierarchy of artists, and successful artists will remain successful artists. It’s just a slight readjustment that moves in the right direction, for music history. It would bring peace to an industry that has never been so divided, and ultimately unite the artist community. Those who dislike the streaming platforms because they do not benefit them would regain confidence in the system. The same goes for users that would appreciate this newly-offered comprehensiveness and fairness.

It is a modern issue that France too has to deal with. The challenge was initiated by Deezer, who offered us the possibility of comfortably putting it to test in real life on a single platform and territory. Let’s not wait for others to do it for us. Let’s be proud and courageous, and make it our own challenge.

*[SNEP is the national trade union for phonographic publishing in France]