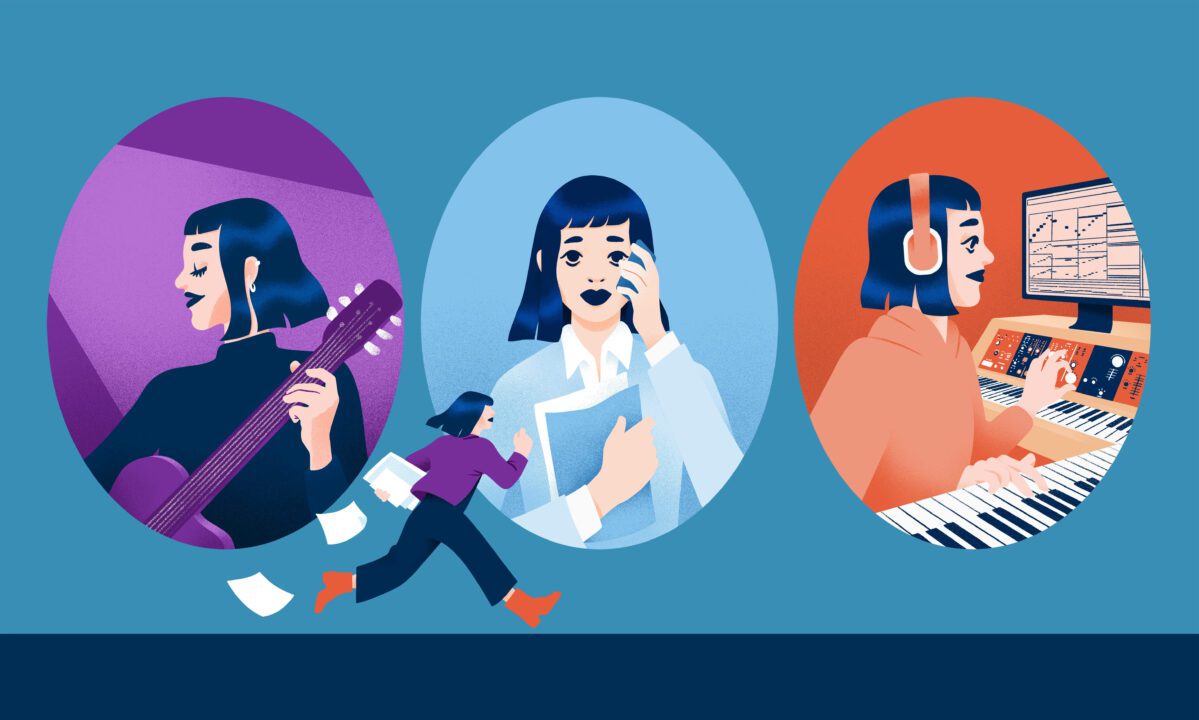 Should you become an artist-entrepreneur

by Pascal Bittard
Everything you ever wanted to know but were too afraid to ask.

The last 20 years have brought some tough challenges to the music business. A reduction in the number of new signings to labels has had a negative impact on artists, while advances in digital technology (both in terms of streaming and social networks) have provided new opportunities. Bit by bit, artists have thus gained autonomy, forging strong direct links with their fanbases, and claiming a larger share of the musical royalties pie. Of course, this general trend manifests itself slightly differently with each individual artist, but it means that each artist must now think very carefully about their status.

Artists are now very good at self-producing, all the way up to the master track. This is partly due to the reasons mentioned above (streaming services and social media), but also thanks to the progress made in terms of equipment. While streaming helps labels to do better, more and more artists want to widen their creative stance by becoming their own boss. This means dealing directly with a professional distributor (like IDOL or Believe), or a free access distributor (such as Tunecore, Distrokid or iMusician), allowing them to put their music on online platforms without any intermediary or adviser. This digital levelling of the playing field goes hand in hand with the decline of traditional media, and the rise of the power of social networks. Artists’ appetites are being whetted by the opportunity to have a greater share of the profits from their music and, at the same time, the ways artists are compensated by streaming platforms is being called into question.

However, being an entrepreneur in this way means that the artist also takes on the role of the label, and as such must also do all the essential work of artistic direction, images (photos, visuals, music videos, internet content), marketing, commercial and promotional strategy. This high degree of independence requires specific skills and a lot of flexibility, while also being one’s own manager. Not to mention the investments linked to the production of the album, studio sessions, musicians’ fees, sound engineers, etc.

The three main reasons for this new trend

The first motivating factor is undoubtedly the fact that cutting out the middleman, and thus increasing one’s share of revenues, can represent a cut of 80% rather than 20%. However, artists might forget that this 80% share apportioned to labels is not fat cats lining their pockets, but rather represents roughly 80% of the work, know-how and investments devoted to an artistic project.

The second reason for going freelance is the desire to retain independence and control over the creative and commercial process. This can be positive, provided the artist has the necessary skills.

Finally, the third reason concerns artists and professionals who, unfortunately, have not yet found a label. Previously, this would have meant the end to their foray into the music industry. Now, their productions can come to life through free access distribution.

Despite all this, the work that labels do is still essential, and very few artists can take on all these tasks alone. Artistic creation requires an enormous amount of energy: composing, writing, recording, performing on stage, honouring promotional obligations…all of this often adds up to more than a full-time job. Mastering all the skills required to be your own label is pretty unusual and very few artists even know where to begin in taking on so many tasks.

The singular and long-term work of labels such as InFiné, No Format!, microqlima, and Heavenly Sweetness couldn’t be done by their artists on their own. Nor could the work involved for Tricatel or Record Makers. In addition to the volume of day to day work they do, the strong identity of these labels represents an unequalled added value for the artist, developing a vision that allows the emergence of artistic projects that might not have existed otherwise.

If, however, an artist chooses the entrepreneurial independent route, it is essential to be surrounded by the right people. Recruiting good collaborators, managing, and delegating are the kind of qualities that being one’s own boss requires.

Any musical genre might lend itself to this way of working, although historically it is rap that has set the pace. Some names worth mentioning are Lomepal with Grand Management (see case study below), Nepal with Etendard Management, and Jazzy Bazz with the agency Derrière Les Planches. Jazz musician Ibrahim Maalouf, who has always worked with his own manager Jean-Louis Perrier, now employs four or five people in his own company. Reggae isn’t to be outdone with Dub Inc – which employs about twenty people – and Naâman. Electro has it’s fair share of entrepreneurial artists too, with Yelle and Thylacine, and pop too with La Femme. Artists with longer careers, such as Tryo, are also shifting their set-ups towards greater independence. In each of these cases, the choice of independence is one that makes sense, the association with IDOL is virtuous, and it is an exciting adventure that has gone above and beyond everyone’s expectations.

Beyond these successful examples – and contrary to what one might think – independent artists are still very much in the minority. Honesty compels us to recognise that the majority of artists who succeed independently would probably have been signed to a label without too many issues, and would most likely have succeeded there too. Sadly, there is no shortage of examples of artists who have left their labels to do less well on their own.

When the choice comes between signing to a label or becoming an independent artist, the important thing is to think carefully about all the involvement that the project requires in order to make it successful. IDOL, having specialised in supporting artists and labels, has the expertise to humbly acknowledge that there is no guaranteed success in the music industry. However, good support from the outset is vital.

There are not that many people who are able to take on the role of an entrepreneurial artist. This is neither good nor bad – it is stating a fact. Being an independent artist-entrepreneur is not necessarily preferable; it is one path among many and must be one that fits with the profile, aspirations and qualities of an artist who is fully aware of what that status entails. One should not choose this route for the wrong reasons. However, if it seems right, finding a good formula is essential.

Lomepal has the ideal independent artist profile, having a thorough understanding of marketing issues, as well as a huge amount of energy. He has been able to trust the agency Grand Management for his career management and IDOL for his distribution. This three-pillared collaboration, where each party went beyond their initial functions to share the work of a label, produced a result greater than the sum of its three parts. The adventure has been deemed a success, not least because the artist himself is remarkable, but also because everyone knew what their role was and were able to work together in harmony.